Lately, I've been thinking about how the Internet is reshaping us. Slowly, and with subtle brush strokes, it has changed how we interview, order food, prepare for tests, meet other people, pick up hobbies, choose vacation spots, move around the city, and choose music. The specific change that I've been dissecting is the shift from material scarcity to attention scarcity.

According to the theory of constraints, as soon as one limiting factor is removed from a system, another component becomes the bottleneck. We're fast approaching a post-scarcity society, where availability of food, shelter, and tools will cease to restrict anyone. This growing material abundance is followed by a growing information abundance. The result of this is that we are less and less constrained by physical resources like iron or grain and increasingly by our attention.

It is our ability to focus on ideas and activities that defines what gets done and what doesn't. Whether someone is starting a company, cooking class, or political campaign, attention is the largest factor deciding if they succeed. Think, for example, of open source software. Some projects attract contributors and thrive while others can't capture enough human mind-hours and fade away.

There's two main reasons why attention is scarce. First, our biology limits us. There are only so many productive hours in a day and drugs can only stretch them for short periods of time. Second, the more urgent case, is that we've spent the last hundred years developing clever ways to capture it. These methods work by sending just the right messages (eg. ads, addictive games) to a brain and claiming a little nugget of attention. It only works some of the time and on some people, but when a person's environment is saturated with these messages, the effect becomes noticeable.

I struggled to get this idea to reveal something new and interesting about the world. Then, I happened upon the following fragment of the excellent Breaking Smart newsletter:

Then everything clicked. Human involvement is a scarce resource like attention. It's what happens when the rubber of thinking meets the road of doing. Taken together, these two ideas can help understand what's happening now and in the near future.

To better explain what I mean, let's put this in a 2x2: 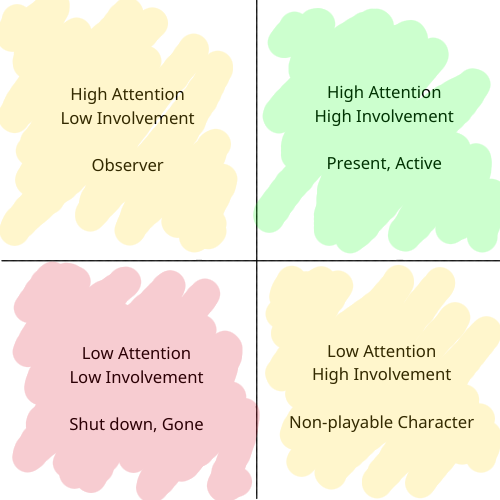 The top right quadrant describes the best state to be in: owning and managing your involvement and attention. Being here means participating in whatever is happening and actively shaping the environment in ways big and small–think: cooking, building companies, and organizing neighborhood sports teams. Above all, it means being able to adapt to the world as it changes.

When something captures a person's involvement, they become an observer, unable to to act. Sometimes, this is self-imposed and temporary, like going on vacation or being in-between projects. But sometimes something external catches and holds people here and their life resembles a constant state of analysis-paralysis. Picture all those involved in arguing politics online, producing all those interesting facts and discussions. None of that translates to affecting reality, so the ability to adapt is weakened.

A mirror reflection of the state described above is when something captures a person's attention. They are still free to act, but without fresh information, they are essentially stuck in a loop. Some college students get into this state when they furiously pursue a degree chosen by their parents, oblivious to the world outside of academia. I've seen this in the software industry too: some engineers stick to one tech stack so long that they are bewildered when they re-engage with the industry again. Like above, people here can still adapt, but there's extra friction.

When someone loses control of both their attention and involvement, they are gone. Absent. Quit the game. Picture it as a combination of the two states above, as spending time on a narrow set of activities while disconnected from the broader world. An extreme form of this is getting inducted into a cult or recruited by an extremist organization. But the common way is getting hooked on social media, on the drama, outrage, and status games it generates. In a way, social media is more insidious than the extreme forms because its power relies on constantly skimming just a little attention/involvement off of billions of minds. Here, the ability to adapt is minimized to merely reacting.

I've found this model useful because it describes the patterns of behavior of people around me. More than that, it allows me to see the bigger picture of what's going on now and what the world will look like in the next five years.

Today, we're seeing some defense mechanisms kick in against attention/involvement exploitation. On the personal level, roughly 1/3 of all Internet users us ad-blockers, and increasing numbers are turning to stricter measures like blocking Youtube's automatic recommendations or getting off social media altogether. Practices like those suggested by [Deep Work][8] are gaining popularity as people become aware of the cost of being constantly exposed to distraction. Anecdotally, doing any of these things a few years ago would get you labeled as a computer-nerd-wizard-tinfoil-hat person, so it makes my heart sing to see these practices become mainstream. This change in attitude is also reflected in more public debate about social media (eg. privacy, impact on teens, etc.) than ever before, which in turn is reflected in increasing government scrutiny–witness the recent lawsuits against Google and Facebook. But this is just the beginning. What comes next is both scarier and cooler.

The near future will be weird in a cyberpunk-uncanny-valley type of way. I bet we will see the introduction of personalized attention-defense products to the market. Picture families shopping around for effective, but affordable ML-powered information filters. Picture ad-block-enabled sunglasses and psychedelic-based digital detox retreats. I predict communities and governments will take more concrete action, like setting up no-or-low-tech schools for kids, subsidized courses about defense-against-the-dark-digital-arts, and probably licensing and regulation aimed at services wanting to play with our brains.

The above development will be forced by a "cold war"-style aggression from both government and private entities seeking to hijack our attention for their benefit. It won't look like any of the flashy stuff we see in sci-fi movies. Instead, it will be subtle and ever-present, like online spelling games for kids that slowly radicalize them, or student loans that include daily indoctrination sessions in the payment contracts. Governments will take part in this as well, trying to literally win the hearts and minds of their opponents–after all, why bomb people if you can simply persuade them to join you?

If that seems too far out, remember that just 20 years ago very few would believe we would all be carrying always-online pocket-sized supercomputers.

Are you prepared for the bright, exciting future ahead?